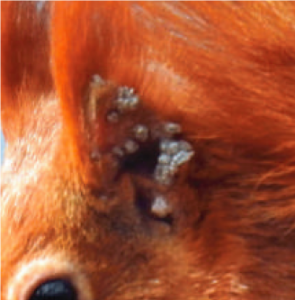 Leprosy on a red squirrel’s ear

Leprosy in red squirrels is a recent discovery, not because it is a new disease but because nobody had picked up on it before. As it is widespread, from Scotland to the Isle of Wight and Brownsea, it’s likely it has been around in red squirrel populations for centuries. When I started working with red squirrels 25 years ago I noticed some had ‘warty ears’ but thought no more of it as they bred and seemed well in other respects. It takes a long time for the disease to progress so most animals would die of something else before the leprosy really took hold.  Read more>>