Our next issue will be our Annual Review in February but already it’s been a remarkable year. The number of greys reported culled this year has exceeded last year’s total and currently stands at 3299 – a testament to the amazing and effective work our volunteers, contractors and landowners are doing to protect our reds.
And reports of reds seen in our area have now reached 465, more than double the figure in 2016. More reds and more reports mean not only that we’re holding the line but that we’re making a real difference and gathering ever greater support. Thank you! Read more>>

In the last issue I reported that by the end of June, MADRS had removed over 900 greys from our patch. This control work has continued and to the end of October a total of 1253 had been removed. Again, we stress that this is not a side of red conservation that is taken lightly. It is absolutely necessary to ensure the survival of the reds.
As always the damage to trees, predation on bird eggs and fledglings and obviously the spread of squirrel pox would have been so much greater had it not been for the remarkable efforts of our ‘Grey’ team.
I also reported the increase in red sightings and am delighted to say that we have further sightings and new reports of reds in Borough Woods near Morpeth. (There are photos further on in the newsletter of these little chaps).
Once again, the real ‘boots on the ground’ work is down primarily to the volunteer/community groups.  Read more>>

In this edition of Red Squirrel News, get an update on the pine marten reinforcement and find out about how they have become frequent visitors to our squirrel feeders, read the latest on the deadly squirrel pox virus from north Wales, plus much more squirrel-related news. Read more>> 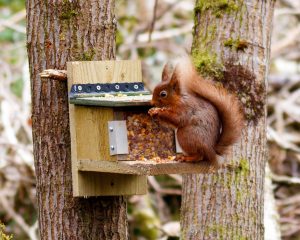 Our thanks go to BASC (www.basc.org.uk) for their kind permission to reproduce this article which was first published in the November/December 2017 issue of Shooting & Conservation, pages 57-59.

With the native red squirrel under threat of extinction in Britain by the introduced gray species, new efforts are underway to kill the latter to save the former. Is that possible, and is it fair?

This article by Greg Norman features the work of Craig Shuttlworth in Wales and with Red Squirrels United, and is published on the website of Deutsche Welle (DW), Germany’s international broadcaster. Read the full article here>>

As we approach the end of this year, we are starting to focus on the future and you will see that we are still busy across a range of activities. We are:

Westmorland County Show is one of the many events we attend each year to promote our work. This year we were honoured to receive a visit by HRH Prince Charles, a stalwart supporter of red squirrel conservation and Patron of the Red Squirrel Survival Trust. He took time to speak with our trustees and supporters, encouraging us to “keep up the good work”. We will!   Read more>>

Leprosy was first diagnosed in red squirrels on the Isle of Wight in 2015. Visual signs to look for are unusual ear and skin lesions, although animals with the leprosy bacteria do not always have symptoms. Helen collected ear samples during routine post-mortem examinations she did on 93 squirrels found dead from all around the Island. Deaths due to natural or unknown causes accounted for 33% of cases and 67% ere as a direct result of human activity, especially road traffic. Helen took the samples to Moredun Research Institute and, after training, tested them for leprosy. Only one out of the samples proved positive. The affected squirrel was an adult male that was a road traffic accident in 2016. There were no visible signs of leprosy. It would be interesting to know if there has ever been a leprosy hospital on the Isle of Wight. Are there any historians out there? In the past we have had two confirmed cases of leprosy in squirrels on the Isle of Wight, one had died in 2004 and the second in 2011. The infection is at a low level in the population and has almost certainly been present on the island – and the rest of the country – for a long time. Read more>>

In 2016, the MADRS grey control team removed 720 greys from our patch. 2017 has seen an increase in greys, no doubt greatly contributed to by such a mild winter and to the end of June, we had removed over 900. The damage to trees, predation on bird eggs and fledgelings and obviously the spread of squirrel pox would have been so much greater had it not been for the remarkable efforts of our ‘Grey’ team. We are indebted to each and every one of them, as quite simply, without this control work, we would have lost our Reds by now. It is only through this continued and relentless work that the native Red has any chance of survival. Encouragingly, we have had more red sightings in areas where we have been undertaking control work and I am delighted to say that 2 Reds, in two different areas near Shadfen were seen recently.
Again, we stress that this is not a side of red conservation that is taken lightly. It is absolutely necessary to ensure the survival of the reds.
It would seem that all the various ‘official’ organisations and the plethora of acronyms that go with them are all essentially reinventing the wheel and patting themselves on the back about saving the Red squirrel. It is however a reality, that the majority of ‘saving’ the red squirrel is down to the sheer hard work and ‘boots on the ground’ from local groups. Without this extensive effort, these funded organisations would have nothing to save. It is a pity that the majority of the salaried people sitting behind desks in these organisations seem oblivious to this. Read more>>

Welcome to our August edition. Red squirrel sightings have rocketed this year. By the end of June 2016 we’d had just 86, although the figure recovered to 244 by the end of the year. In 2017, however, we have already had 309 reported, with five months to go. These reports are essential for mapping red squirrel range so please keep them coming. Read more>>