2016 has proved to be quite interesting. The early months saw greatly reduced grey sightings and in fact all sightings both red and grey were down. This was being reported across the board by many local groups. We then had quite sudden surges of grey activity in areas, and our enormous thanks as usual go to our grey control team who dealt with these. In the Shadfen area, where we have had very little grey activity, we have suddenly experienced a grey invasion and 17 were removed in July alone. This grey control is as always absolutely essential as there are a colony of reds in this area who have to be protected. There have been a family of reds visiting feeders which was lovely to see, but 12 greys were also removed from these feeders too. We had a heart stopping moment when one of the juvenile reds appeared to be quite sluggish and was not eating well and we suspected squirrel pox. This little red was caught and taken to a local vets where sadly it had to be euthanised. Fingers crossed…so far this looks like the one and only case. Swift action to remove incoming greys and also sadly removing this poorly red quickly, hopefully has protected the others. Read more>> 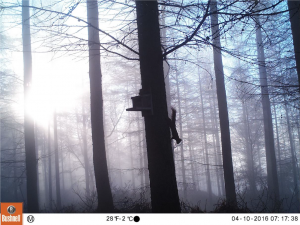 This report details the results of red and grey squirrel range monitoring organised by Red Squirrels Northern England (RSNE) in spring 2016. The aim of this standardised monitoring is to collect a dataset over time that will help demonstrate the impact of red squirrel conservation activity on the distribution of red and grey squirrels. The results of standardised surveying in 293 woodland sites are detailed here, together with additional data collected from a variety of sources to provide a current snapshot of red and grey distribution across northern England. You can download the full 26 page report here>>

What a winter it has been! Needless to say it has been a very testing period for both humans and wildlife alike over the winter months. With consistent torrential rain, floods, high winds and at times bitterly cold weather it has certainly been a challenging time. 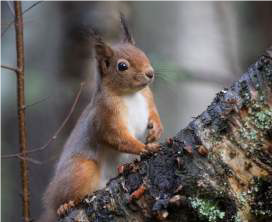 Work has of course continued as well as possible with the rangers and volunteers monitoring the various areas, carrying out grey control and dealing with the challenges at hand. Unfortunately the pox virus has once again reared its ugly head in some areas having a varying degree of impact amongst the red squirrel population. In most cases, with the various actions taken by both the rangers and volunteers, the pox was soon contained with healthy reds thankfully still being seen. Read more>>

ESI is a widely supported charity set up 14 years ago. It consists of mainly voluntary expertise from land managers, forest managers, conservationists, researchers and academics. ESI is very well placed to tackle the grey squirrel challenge, as our costs are low but our expertise is high. We are the only charitable organisation in Britain working with the issue of grey squirrel management on a large scale and working with others to do the same. Read more>>

Many people in the mid Wales, and within the Red Squirrel Focal Site in particular, have reported that they have not seen many, or even any, grey squirrels this year.  A phenomenon which I think, at least partially, can be attributed to our trapping efforts, nearly 1,170 taken out in the last 12 months by Trap Loan Scheme members. Although grey squirrel numbers still appear to be high in other regions of  Britain, theories  have been put forward which may also partially account for the apparent drop in the local grey squirrel population, such as persistent wet weather over the winter months causing cached food supplies to decay. Grey squirrels depend much more on stored food than reds, so, if their food stores are rotten this could be one factor affecting their decline. As far as the red squirrel goes, this is all to the good, of course! Unfortunately, when numbers are low, it takes much more time to catch any grey squirrels do turn up.   Read more>>

Our four years of Heritage Lottery Funding for community engagement work has now concluded. Chris Westerback and Katy Cook’s RSNE community development roles finished in March, although they will both continue to have partial involvement in RSNE. As such, The Red Report will now become a bi annual newsletter, with editions in summer and winter.  Read more>>

We’re privileged to bring you an article about which tree species help red squirrels, written for us by three eminent red squirrel scientists: Dr Peter Lurz, Dr Craig Shuttleworth and Professor John Gurnell.  In Westmorland’s area we are experiencing tree disease and its consequent felling and re-planting, and it’s important that our red squirrels are taken into account in woodland planning, alongside all the other woodland species that vie for attention.

A glut of natural food caused last year’s grey population explosion, but there’s been a complete reversal of food supply over this last autumn/winter, which has had an impact on grey numbers. Only time will tell exactly what we’ll face this year, but there have been good years for greys in the past and we’re not known for giving up at the first hurdle. The problem with the Forestry Commission not allowing suitably trained volunteers to shoot on their land continues to be a thorn in our side.  Read more>>

Grey squirrels  don’t  only  present a problem for red squirrels, they are also responsible for damage to property.  According to a study published in 2011 by the international scientific organisation CABI for DEFRA, Scottish Government and the Welsh Assembly, grey squirrels cost the British economy an estimated £14 million per annum; damage to power cables alone is estimated to cost millions of pounds in the UK.  An article in the Guardian identifies hundreds of power outages which  can be directly attributed to squirrels.

A wildlife organisation has criticised the Forestry Commission over its policy of dealing with grey squirrels and claimed the animals should be culled with airguns.

The European Squirrel Initiative (ESI) said the grey squirrel is an invasive, non-native species which is dominating the UK woodland. Read more>>

You may remember we mentioned in our previous Winter/Spring 2015 newsletter that it has been a bountiful year for nature in general, with natural food being produced in abundance at the end of 2014. This year’s crop doesn’t seem to have been as productive however with conditions having been good for squirrels in general, there certainly has been a lot of activity on both the red and grey squirrel front!The red population in some areas appears stable, with populations in others seeming to fluctuate (which is natural) and in one or two cases reds have made an appearance where they haven’t been seen for some time – encouraging indeed. Read more>>