In sharp contrast, the mortality rate for untreated infected red squirrels in the wild appears to be 100%, most dying within 15 days of being infected. If caught early enough a vet may be able to treat the squirrel but success is rare.

The virus can spread through contact with the infected lesions or contaminated crusts. Most pox viruses are highly resistant to drying, which allows crusts to remain infectious for long periods of time. It is believed that the virus can be transferred by contaminated feeders, which is why red squirrel preservation organisations often recommend that feeders are disinfected daily. Traps and equipment used for catching greys in areas also occupied by red squirrels should also be disinfected. 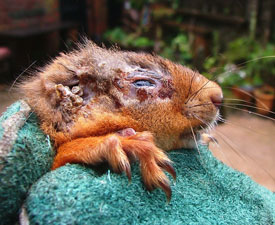 In red squirrels, the virus causes skin ulcers, lesions, and scabs. It can also cause swelling and discharge (from the lesions/scabs) near the eyes, mouth, feet, and genitalia. Additionally, squirrels that fall victim to the disease often become increasingly lethargic as it progresses. Infected animals are said to resemble rabbits with myxomatosis, in that they are sometimes found shivering and lethargic. Death normally follows and is a long and painful experience.

If you find a sickly or dead red squirrel

If you find a sickly red squirrel or a dead red squirrel (which does not have obvious signs of injury like road kill), please get in touch with us urgently on our HOTLINE number: 07878 061880.  If no reply, please leave a message.