Why Should Grey Squirrels be Controlled? 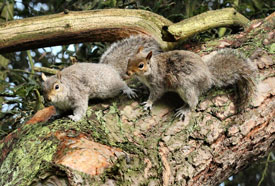 Grey squirrels carry the squirrel pox virus which is harmless to them but causes death in red squirrels usually within 2 weeks.

On average, a grey squirrel weighs roughly twice as much as a red squirrel, and they live at roughly three times the density, meaning that overall greys eat 6-8 times more than reds, so out-competing them for food. This also means that greys have a much greater impact on the environment.

Red squirrels are sensitive to high numbers of squirrels and will stop breeding if there are too many squirrels in a woodland. Greys do this too, but their threshold to stop is much higher than the reds.

Grey Squirrels also eat birds’ eggs and chicks, raid crops and destroy trees through bark-stripping. The economic damage to timber crops is immense. To find out more, follow this link>>

Grey squirrels will inhabit lofts and roof spaces and can cause untold damage, including causing fires by chewing through wires.

If you live in an area with red squirrels you can: